July 06, 2020
Rapid infrastructure development while will help boost the country’s economy, there is a need to pay timely attention to the fact that such projects can also have an adverse impact on the country’s biodiversity 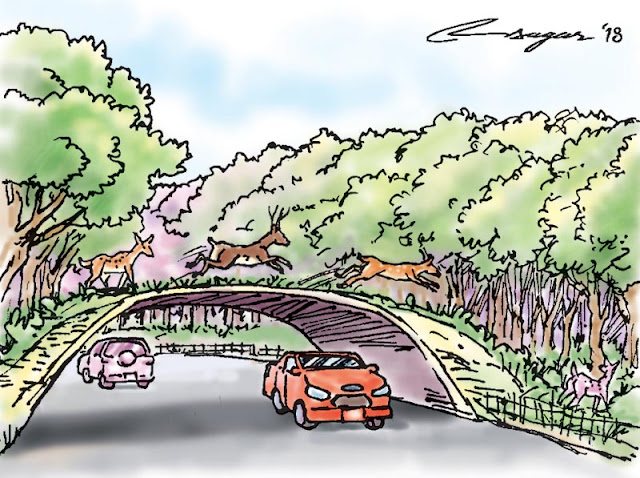 Illustration: Ratna Sagar Shrestha/THT
We are living in the most explosive era of infrastructure expansion in human history. Studies and records have shown that in the next three years, paved roads in Asia’s developing nations will double in length. As per Science Magazine, in the next three decades, the total length of additional paved roads worldwide could be 25 million kilometres – enough to encircle the planet more than 600 times. With Nepal having stepped into the federal structure, development of infrastructure seems more viable as the nation’s capital expenditure is expected to be better exploited through a check and balance strategy, which will hopefully drive the infrastructure trends towards prosperity. However, to achieve Sustainable Green Infrastructure (SGI), it is imperative that the nation’s need and development interest are balanced and infrastructure development does not come at the cost of biodiversity loss.
Nepal’s pride projects including national highways, railways, irrigation canals and hydropower plants will indeed uplift the country’s standards. However, the impact these projects will have on the environment is something that needs to be addressed timely. Nepal is an enriched biodiversity hotspot occupying 0.1 per cent of the total land mass in the world and is home to 4.5 per cent mammals, including iconic species like the Bengal tiger, one-horned rhinoceros, snow leopard and Asian elephant. Infrastructure, mainly linear, are of great interest to conservationists as they pose a maximum threat to wildlife.
Forest loss and fragmentation caused by infrastructural development through critical forest areas including critical corridors and buffer zones restrict the free movement of wild animals within such territories. Conservationists and environmentalists fear that the increasing demand for such development will adversely affect the flora and fauna of Nepal.
The planned extension of Mahendra Highway from the existing two lanes to four with the length of 1,028 kilometres from Kakarbhitta in the east to Bhimdatta in the west will have a major impact on Parsa National Park in the east, including Chitwan National Park in the centre, Banke and Bardiya National Park in the mid-west and Shuklaphanta National Park in the far-west.
The Barandabhar Corridor of Chitwan National Buffer Zone, however, has four underpasses, especially built by the Department of Roads, and is a first of its kind in the Nepali context.
More mitigating structures – underpasses and overpasses – are required at various sections of the Narayanghat-Butwal road among others. Similar is the case of the 1,795km long East-West Postal Highway spanning through the Nepali border in the south which has a direct bearing on the Western Terai Arc Landscape, as it extends through critical corridors and bottlenecks including Laljhadi-Mohana, Karnali, Khata and Kamdi corridors. Besides these, other linear infrastructures – railways, irrigation canals, and transmission lines are in the pipeline and proper mitigating structures which will aid free movement of wild animals is the need of the hour.
Irrigation canals of about 100 meters width spanning over the right of way (ROW) have fragmented forests and ultimately affected the free movement of wild animals in Sikta, Babai and Ranijamariya-Kulariya. Sikta Irrigation Project, whose main canal is 54 kilometres long has fragmented the forest section of Banke district. Similar is the case in Ranijamara-Kulariya Irrigation project (RKIP) which has fragmented the Karnali Corridor. However, Sikta Irrigation Project has the provision of overpasses within a kilometre range at strategic locations maintaining safe passages along with village road bridges for wildlife. The East-West Electrified Railways, which is still in the planning phase, is also expected to have adverse impacts if not implemented considering the interests of biodiversity.
The major challenges that stem from unplanned infrastructure in effect include forest loss and fragmentation, increased road kill incidences and death of wildlife from drowning and electrocution. The introduction of proper mitigating structures therefore becomes imperative for wildlife crossings at strategic locations derived from a detailed biodiversity assessment. For example, cat species have good swimming skills which could prevent them from drowning in irrigation canals when crossing over.
However, the ungulate species such as deer are at disadvantage, given steep slopes of the irrigation canals. To avoid more accidents, animal-friendly ramp structures that have already been constructed in some irrigation canals need to be replicated. The construction of underpasses at Narayanghat-Muglin road section and overpasses in Sikta Irrigation Project, despite mixed responses, has proved that stakeholders engaged in development do consider conservation a priority. The learnings from these projects will be the key to other linear infrastructure development projects including the adherence to recommendations and considerations of Environmental Impact Assessment (EIA).
SGI is therefore a pathway to the nation’s development while prioritising environment protection. This requires, more than ever, stronger collaboration and coordination between conservation and development stakeholders as Nepal moves towards becoming a middle-income country by 2030.

The published online version can be accessed here;
https://thehimalayantimes.com/opinion/saving-biodiversity-timely-actions-required/

Popular posts from this blog